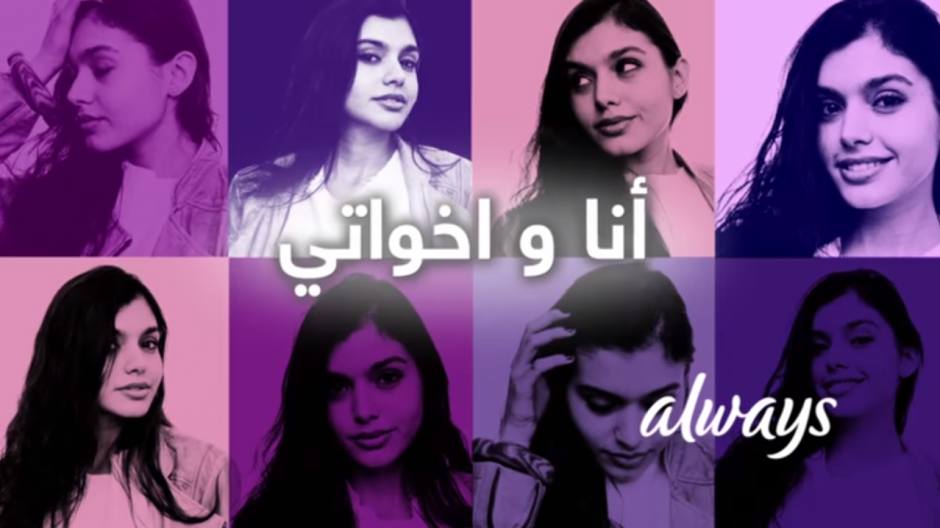 “Me and my sisters” is a web series created for Always Arabia by Olive Tree Productions. The first season of 8 episodes highlights the life of 4 sisters (Alia, Farah, Sarah and Yasmine) and the relationship between them. The different episodes are related to events happening during the same day, a day during which Alia, one of the sisters who is a fashion designer, has her fashion show planned for the night. Of course everything starts going wrong and she needs help from each one of her sisters.

– Episodes are very short, leaving no time for the viewer to get bored. Every 2min episodes ends with a cliffhanger, making it impossible no to want to watch he next one.

– Apart from the fashion show story, the central theme of the series is based on the sisters’ different moods, creating an indirect link between the content and the fact that a brand like Always is creating it.

– Another nice thing is that the series is showing the Arab women in a modern, dynamic and ambitious way while at the same time highlighting values that are key for Arab societies such as the importance of family.

– Great content production but low viewership: The online media buying or advertising plan around the series was not properly done since the number of views on Always Arabia Youtube channel (https://www.youtube.com/user/AlwaysArabia) is rather low. The first episode has around 265 000 views but all the others have 40 000 views in average.

– A lack of engagement and interactivity: One of the ways of putting the content out there and making the audience talk about it more and share it more, would have been to give the chance to the viewers to become part of the story. Some ideas of how this could have been done:

If you still haven’t, you can watch the full episodes here. 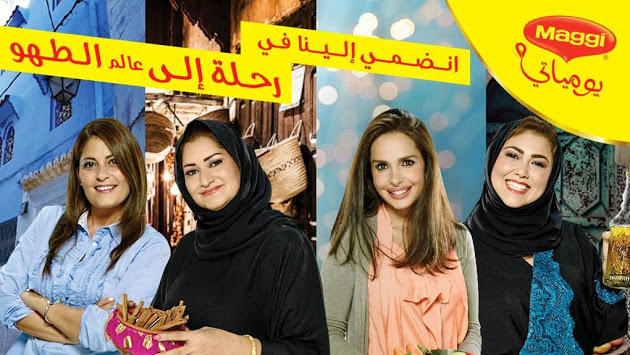 MAGGI Diaries is a web series produced under the form of a web documentary, created by Publicis ME for Nestle. Through the eyes of four Arab women traveling across Middle Eastern countries such as Morocco, Jordan, Oman and the UAE, MAGGI connects with its audience by unveiling new culinary discoveries, inspiring everyday cooking and creating good food moments in real life.

What we love about this web series: Simply everything.

– By sharing the passion of cooking as well as the cultural and culinary experience of four ordinary housewives who took part in creating the content, MAGGI appears like a brand that is very close to its audience, a brand with a “human” touch, ready to engage and interact with its audience online.

– An integrated digital campaign in collaboration with Youtube with customized location web development and social media widgets directly added on MAGGI Arabia Youtube channel helped maximize engagement by offering the possibility to directly share the content and comment on it while viewing it.

Apparently, the brand was approached many times on its various social platforms by women from all over the region asking to be part in future MAGGI Diaries. It would have been great to see Nestle launch a huge regional culinary marketing activation to increase the buzz and choose the next ambassadors for the coming season.

Following the success of the first season, another season is currently being shot with a culinary exploration across India, Turkey, the Kingdom of Saudi Arabia, the United Arab Emirates and Italy. You can watch the MAGGI Diaries first season here 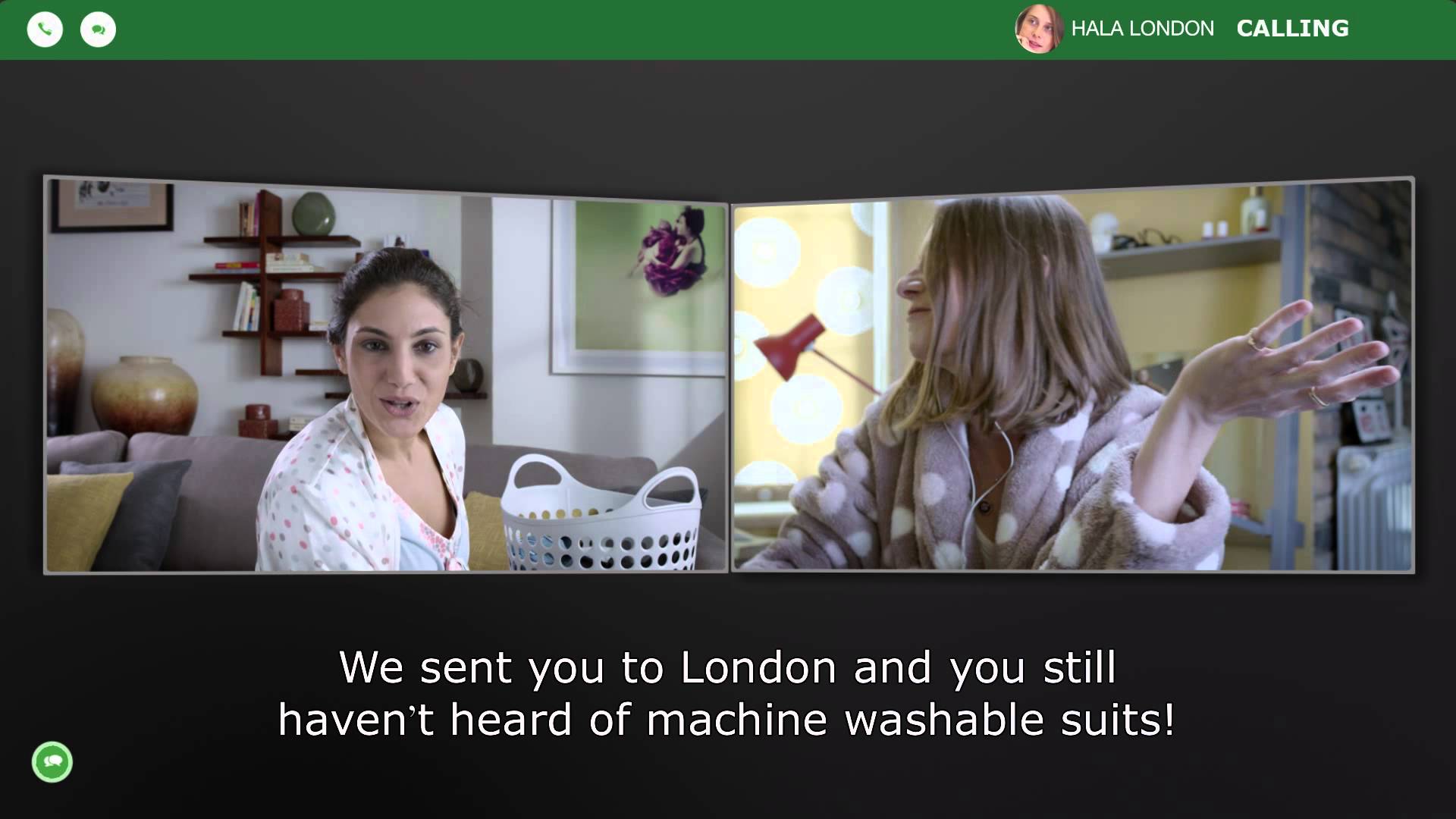 London Calling is a web series created for Marks & Spencer Arabia by Olive Tree Productions. With 2 seasons already live, the web series follows the life of a typical Lebanese family through their daily video calls, with the parents (Muna and Saleem) living in Beirut, the oldest daughter Shireen happily married with Kareem and living in Dubai and the youngest daughter Hala, pursuing her Masters in London.

– A good mix between light comedy and play-acting: everyone can actually recognize themselves in the different situations presented through every episode. The scenarios are so close to reality that it actually gives you a good laugh.

– A glimpse of the different Arab cultures: Even if the first season is very Lebanese oriented, which actually makes you wonder who is the actual audience M&S is looking to target, a very successful shift was made in the second season were Kareem and his family turned out to be Egyptians and a friend of Hala from another Arab country (not sure if she was Jordanian or from another nationality) was introduced.

– Product placement is too obvious: Even if the whole brand content approach is kind of new for brands in the MENA markets, the different M&S products could have been introduced in a smoother way.

– Youtube interactive features are not used effectively: Instead of just highlighting a M&S product in the scenario or showing a M&S bag on screen, interactive features could have been added on all the products indirectly featured on the screen (clothes, accessories, decoration etc…). This way, viewers who click on the product would be redirected to M&S online products catalog or ecommerce platform where they could directly view the product or even have the possibility to purchase it online.

– Engagement is not generated: A question related to the theme of the episode pops at the end of some of the episodes creating great opportunity to engage discussion with the viewers in real time following a specific hashtag on another social media platform such as Twitter. However, no clear call to action is made to push that discussion.

I am really curious on a personal level to see what will happen in the next seasons and how the series will evolve, so I really wish for a season 3. In the meantime, you can already watch season 1 and season 2.

4- Land Rover: My journey My inspiration

Land Rover MENA launched the web series “My Journey, My Inspiration” as part of its creative communications platform, MYLAND as a way to showcase inspirational stories of achievers from across the MENA region. The achievers, from Oman, Qatar, Lebanon, Kuwait and the UAE, all share one thing in common, they are inspired by the culture and heritage of their land, and have succeeded in truly going above and beyond in their accomplishments.

– Emotions are at the heart of the content creation: The stories are a true inspiration because they celebrate amazing people raising awareness for amazing causes which positions Land Rover as a brand invested in social change. The web series invites the audience to discover the most amazing places creating a sense of pride, bringing back shared memories and shaping inspiring journeys.

– My journey My inspiration is part of a bigger initiative: MYLAND The episodes are featured on the online hub mylandmena.com, which also hosts Land Rover stories, competitions, activities, initiatives and user-generated content.

The web series is still running, so we’re not sure of what is planned and what is not. However it would be great to go beyond the inspiration part and actually find a way of involving the audience and pushing them to take action in favor of the highlighted “causes”.

You can already watch it here.